Welcome to the second of my research posts, covering books that went into the making of My Year Zero (MYZ). Below you’ll find two more books about bipolar disorder, one about emotional neglect, and one about girl sex.

Should I really be talking about mental illnesses and sex in the same post? Absolutely! People with mental illnesses like sex as much as neurotypical people – and some of us are at greater risk for engaging in unsafe behavior, so leaning how to work your brain goes hand in hand with learning how to talk about safer sex.

Mood Charting for everyone

The Bipolar Disorder Survival Guide, Second Edition: What You and Your Family Need to Know by David J. Miklowitz

Most books on bipolar recommend mood charting. I liked the way this one did. He uses a -3 to +3 scale (which you’ll see Blake uses in the book too). That felt very manageable to me, although a lot of people use a -5 to +5 scale. On the whole this book took a very hands-on approach. I listened to it on audio, so I’m not including a big quote, but here’s an image from the sample mood chart that comes with the audio version: 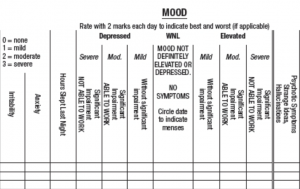 After listening to this book, I started charting my levels of focus and this helped me really zero in on the impact of sleep, diet and hormones on my attention. It was either this book or the one below that made me really look at my own sleep patterns and see that when my sleep is off, my ability to focus is strongly impacted.

Another very cool feature about using a mood chart (or focus chart) is that you can get an idea of how you’re operating compared to the people around you. It’s a good way to get that if most of the people around you have never felt a persistent -2 state, or a +2 state, there can be some difficulty in communicating your experience to them.

If someone you love has a mental illness and keeps track of moods this way, it can be an effective shorthand for how they’re doing. For example a -2 is really bad, but a -3 is dangerous. That can help you know what to do to support them. (For more about setting up checklists that help you know what to do to help someone you love, see last week’s post of my bipolar disorder research highlights.)

Dealing with the disorder

This book is extremely pragmatic about dealing with bipolar disorder in your daily life, including all the ways people don’t want to have to face it after they’re diagnosed. It’s eloquent about the denial people often go through and the sadness of having to change their expectations about what their lives will be like.

Our intent is to make Bipolar City less frightening, less lonely, and less strange. You’ll come to see that it’s a different city from the one you were setting out for, but it’s still quite livable. The hitch is that you don’t get to live there unless you’re able to let go of your expectations about the other place you had hoped to reach. And once you come to terms with this loss, once you’re able to look around and realistically assess what it takes to make a home in your new destination, then you’ll be in a much better position to tackle the reality of bipolar disorder. We hope to help you manage this important transition.

I was primed to be thinking about sleep with the first book above, and by the time I got to reading this one, the persistent nudging (and the acknowledgement that having to be more rigorous about your sleeps sucks) started to sink in. You’ll see some references to sleep in My Year Zero as well. Like bipolar disorder, ADHD is one in which sleep can be disrupted. As I understand it, the mechanism is different: dysregulated circadian rhythms for bipolar and racing thoughts for ADHD, but the recommendations are very similar. These include keeping to a regular sleep schedule that lets you get 8-9 hours of sleep a night.

Here’s one of the passages from the book that I found persuasive about making good sleep choices:

You’ll have to start making choices that are different from the choices of most others you know. You won’t do it because you like it. You’ll make your choices because you know they’re healthy ones. Most people with type 1 diabetes don’t enjoy injecting themselves with insulin and going without desserts, but they do these things because the consequence of not doing them is much worse. If you knew that you would lose consciousness and lapse into a coma without consistent sleep, you’d probably make sure that you kept to a consistent sleep schedule.

What makes this all much more complicated is that managing your bipolar disorder is going to affect your social life. It’s one thing to pass up the slice of birthday cake or to excuse yourself in order to give yourself an insulin injection. It’s quite another thing to have to say good-bye to your friends and return home because you need your sleep. We’ll explore this difference in more depth in the next chapter. For now, it’s important to recognize that if you want to successfully live with bipolar disorder, there are things you can do to enhance your ability to remain stable. Establishing a regular sleep schedule in the midst of an irregular phase of life is a big challenge. But it is doable.

And lastly I’m going to give you this quote that I love:

There’s no doubt about it: Having a mental disorder is a humbling experience. It’s not something you can simply overcome by the force of your will or handle effectively through fierce independence. It’s a condition that causes you to recognize the importance of support you receive through the different relationships in your life. None of us are without vulnerabilities, and when we find others whose struggles are similar to our own, we’ve found gold.

When I started MYZ, it was with the idea of Blake. I wanted a character inspired by the girlfriend I had at 16 — struggling and loving, funny and smart and interesting. And I wanted to showcase what a person with bipolar disorder could teach her peers.

So if bipolar tends to grant people a very wide range of emotions, it made sense to pair Blake with a girl who was very shut down. To get more background on what she would be like, I read this book about emotional neglect. In it, the author writes:

“Pure emotional neglect is invisible. It can be extremely subtle, and it rarely has any physical or visible signs. In fact, many emotionally neglected children have received excellent physical care. Many come from families that seem ideal. The people for whom I write this book are unlikely to have been identified as neglected by any outward signs, and are in fact unlikely to have been identified as neglected at all.

So why write a book? After all, if the topic of Emotional Neglect has gone unnoticed by researchers and professionals all this time, how debilitating can it really be? The truth is, people suffering from Emotional Neglect are in pain. But they can’t figure out why, and too often, neither can the therapists treating them.”

The book gives 10 symptoms of emotional neglect, but the ones I chose for Lauren in particular were:

The first part of the book details the symptoms of emotional neglect, and then she talks about how to heal from that, starting with a smart chapter about how change happens and then the even awesomer chapter “Why Feelings Matter and What To Do With Them.” That chapter has sub-sections about understanding and naming emotions, trusting them and learning to express them.

In our society we undervalue emotion. It’s often viewed as a nuisance. Words are frequently applied to it like “sappy,” “mushy,” or “schmaltzy.” Emotion is often thought of as childish, effeminate or weak. It’s considered the antithesis of thought. We have a tendency to assume that smart people aren’t emotional people, and emotional people aren’t smart. The reality is that the smartest people are those who use their emotions to help them think and who use their thoughts to manage their emotions.

It’s not all charts and therapy

This might seem like an odd book to pair with one about emotional neglect, but it’s actually a very good fit. In MYZ, Lauren isn’t having safer sex in part because she doesn’t have a good sense about how to take care of herself on any level. You don’t have to have experienced emotional neglect (or any kind of abuse) to be in the dark about how to take care of yourself when it comes to sex. We still live in a world where people don’t routinely get useful info about how to talk about sex and what they need.

According to this great Autostraddle article, the Journal of Adolescent Health recently reported on a study of 3000 cisgender girls in the U.S. Key takeaway: “lesbian teenagers have sex younger, have more partners and engage in riskier practices than bi or heterosexual girls.” (You should go read the Autostraddle article, it’s excellent.)

That report found that “Lesbian teens reportedly lose their virginity at the average age of 13 years 9 months, which is significantly younger than bisexual (15 years 1 month) and heterosexual (15 years 6 months) girls.” Which did not jive with the findings of Autostraddle’s own survey, in which only 21% of lesbians had sex before the age of 16. Regardless, the point here is that some significant percentage of girls are having sex in their teens – with boys, girls and non-binary people (though that’s been studied less). Hence it’s really good if you know how to talk to a variety of people about safer sex and how to have it.

Furthermore, they found that “lesbian and bisexual adolescents also have considerably more sexual partners than straight girls” and that “lesbians were much riskier about safe sex than their peers, with less than a third saying they had discussed using condoms or dental dams with their most recent sexual partner.”

MYZ is a YA novel in which the main character has sex with two girls and none of it was safe because this is the real, lived experience for a lot of people. And these people, like me at 16, need books like Girl Sex 101. In fact, I pored over Girl Sex 101 trying to figure out if there was any reasonable, true-to-the-characters way to sneak a safer sex conversation into MYZ. (You’ll notice I didn’t come up with one, but rest assured, there will be age-appropriate and awesome safer sex conversations in future books.)

Part of the genius of Girl Sex 101 is that it combines the factual stuff with playful illustrations and short snippets of fiction. To give you an idea of the tone, here’s a very cool quote distinguishing informed consent from enthusiastic consent:

“Enthusiastic consent means not only agreement, but genuine enthusiasm for the proposed activity. Enthusiasm mitigates issues of bullying, coercion, intoxication, and peer pressure.

I don’t know about you, but I could’ve used that info a lot earlier than I got it. Rumor has it, Allison is working on smaller books on topics related to Girl Sex 101, some of which will be great for teens. I’m excited to see these!

The illustrations by kd diamond really help bring everything together and to give you a quick example, here’s a comic from the chapter on having difficult conversations: 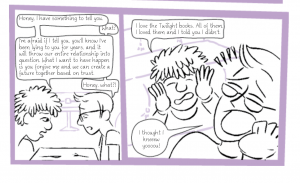 (This should not be seen as an endorsement of sparkly vampires.)

If you have favorite resources for self-care, safer sex or mental health, feel free to share in the comments!