I do have the best job in the world

Wednesday afternoon I got to visit the Gay-Straight Alliance (GSA) at Valley View Middle School in Bloomington and read a bit from Being Emily and from the sequel that will be out next year. This is my second favorite aspect of being an author: talking to people about the book, the process, the ideas in the book, and in this case also video games. (My first favorite aspect of being an author, you might be able to guess, is writing books.) 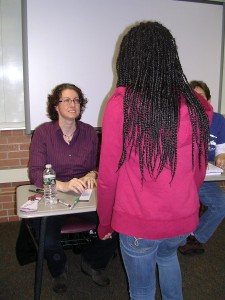 And then I signed books and bookmarks because I’m that cool author who plays video games.

It’s unusual for a middle school to have a GSA and the turnout was really impressive with about 15-20 students and a bunch of supportive teachers and other adults. I can’t imagine what it would have been like for my middle school to have a GSA. I came out in high school and was lucky to have at least one friend who was a little older and GLBT-supportive. It’s great to see that access to supportive peers and adults is much more open these days.

The event was set up by RECLAIM, an amazing facility in Uptown Minneapolis that helps LGBT youth gain access to mental health support. They’re sourcing book circles for Being Emily and Kirstin Cronn-Mills’ Beautiful Music for Ugly Children to give people a way to more easily talk about trans issues, which is brilliant because often cis-gender people (“cis” is Latin for “not trans”) don’t have any idea where to start a conversation in their school, faith-group or corporation even though they want to make the space safer for transgender people.

I love the how middle schoolers are quick and varied with their questions. I got everything from, “How old are you?” (a question I often ask myself) to, “Do you get recognized in public as an author?” (no, only at relevant events, it’s not like being a TV star, for which I’m very grateful).

My favorite question was probably, “What games do you play?” The interest level in the room was good, but when I said that I play video games the room exploded with excitement. I took the opportunity to ask back a bunch of questions that I was curious to ask middle schoolers:

How many of you play games? — Just about all of them.

Are you playing on a mobile device like your phone or a tablet? — Most of them.

Do you play on a computer? — Less than half.

Do you play on a console like an Xbox? — About half.

Is Twitter for grown-ups* or do you use it? — A little less than half use it, about half done, a few hate it but might use it anyway.

What games do you play? — World of Warcraft, Pokemon, Facebook games, Skyrim**, Minecraft.

* This was a quote from an 18-year-old friend and everyone laughed when I said it this way, so it seems it’s an open debate.

Then it occurred to me: I might be a bad influence

Another highlight of the hour was a girl who said she’d just started Being Emily and couldn’t put it down — that she was reading it during math class. I remember doing that same thing in middle school, and then I revealed that, in fact, I flunked a quarter of 7th grade science because I was writing a Star Trek novel with my lab partner. One of the students asked if that had ever been published and I said that not only had it not been published and would never be published, but I’m afraid to go back and look at it because I’m sure it’s quite bad.

Although I may not have turned anyone on to math (though I later pointed out that you end up using math a lot in gaming), I hope I planted the idea in a few people’s minds that writers don’t start out writing brilliant, deathless prose. A few lucky writers start out at good and the rest of us start somewhere between not-good and terribad. I was writing fantasy and science fiction stories beginning around age 10 and let’s just say that Being Emily is worlds better than those. However, my younger self did have good ideas, some of which carried through to projects I’ve worked on as an adult.

Even if I conveyed the idea that it’s okay to flunk a quarter of science (highly not recommended, in truth), I hope what really came across is that if you’re a teen or pre-teen who’s GLBT and/or a writer, you can create an amazing life for yourself if you just keep going.

My middle school years were some of my hardest, but I had a few key allies, friends and teachers, who got me through (Mr. Kenworthy, I’m waving at you). I know how tough it is when how you feel doesn’t match the sexuality and gender roles the people around you are taking for granted, and I know how tough it is to grow up determined to pursue an artistic path. Bottom line: it’s all possible. And these days I hope it’s easier than ever to find the allies and the support you need, plus having awesome games you can use to play, relax and explore different ways to be yourself.