The first is pretty straightforward and I’m cheerfully accepting better synonyms for “dude,” which I generally use to mean: person I’m fond of in a co-player sense. Coming from a gaming context, I use it for both men and women, but then I realized that if you don’t know that and you randomly hear me use it, it sounds just a gendered as people who think there’s such a thing as using male pronouns as a universal. So far my favorite suggestion for a replacement has been, “Peep!” We’ll see if I can rock that.

On to #2. Trying to describe my gender in an email to the other panel members for “Solving Gender Neutrality” in the week before the panel was a lot harder than I expected. (If you want the excellent list of resources put together by another panel member, it’s online at: http://www.kith.org/go/gnp.) On the one hand, my gender seems very straightforward: I was assigned a female gender at birth, I have a body that most people would identify as very middle of the road female, I generally like being a woman — so I’m a cisgender woman, right?

Except that I came out pretty young as a lesbian and that had an impact on my gender. I started coming out consciously to myself at 13, but I think I was already subconsciously girl-focused well before that. I remember in grade school not understanding why most of the other girls gave a darn about the boys. And as we moved into junior high and dating became a thing, I was very clear that I wanted to avoid male attention — and the easy way to do this is by not being a woman.

Of course it could also be that I come from an academic family and part of my childhood was spent as a disembodied brain. Who knows? Anyway, by the time I got to college, I felt pretty genderless or maybe non-specifically genderful. I remember being asked by a kid on the street one time, “Are you a girl or a boy?” and I said, “Both.”

It could also be accurate to say that I was both a woman and not a woman. I went butch for a while because it’s a great way to avoid the male gaze and signal to other women who might be interested that I’m playing for their team. That lasted through my tenure as a reporter for an LGBT newspaper, but then I ended up in the corporate world and my style morphed into a rather-awkward-business-casual-with-earrings format. 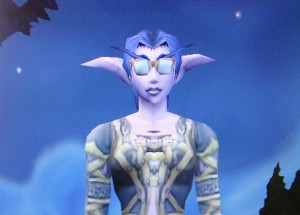 Then there was online gaming and the ability to play both genders, which I took to pretty quickly. Okay, yes, my first character in World of Warcraft looked oddly like me (including glasses), but my second was an elf guy. Now I’ve been an 8-foot-tall male minotaur for about five years and I’m very comfortable in his body. As Lightbringr, I enjoy the balance of tremendous strength and a non-traditionally male role: healing. And I like wearing battle dresses. 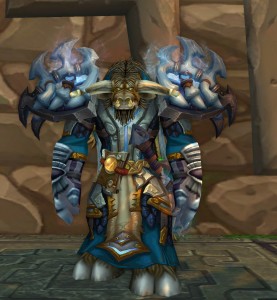 I’ve played both male and female characters in WoW and most of the games I played until a year or two ago — to a large degree very consciously both because I like having a spare male body around and because people assume you’re male if you have a male character. It’s fun being a guy sometimes. I hope I’m just imagining it, but it seems like people don’t question me as much and there’s no harassment.

But then I read Julia Serano and realized that I had some anti-feminine sentiment in my own head and that could not stand. So over the last two years I’ve been making a concerted effort to play on Team Femme. I feel like I’m coming into the realm of the feminine from a direction outside the gender binary and that I can only get in there by following friends like Kate Bornstein who have shown me there are ways to perform “girl” that are amazing and beautiful and revolutionary.

When I take a path from non-binary through trans-feminine, I come into girlhood/womanhood/femininity in a way that actually feels comfortable to me. And playful!

Then I noticed that it changed how I game. For the last year or two, I’ve rolled no new male characters. Some of that was a conscious choice to represent women gamers by having female characters and acting out empowered female heroes. And some may have happened because new games I’ve been playing have better physical choices for female toons. I love the athletic female build in Star Wars: The Old Repulic and even more so the ripped athletic female physiques in Dark Souls 2 (sadly I spend most of the game undead, but at least I still have broad shoulders).

But then I wondered if picking physically imposing female characters was still a smidge anti-feminine, so I started playing with small female bodies.

After WisCon I came home and rolled a new character in The Secret World to play with friends of mine and then looked at her and realized she and I kind of look similar. I’ve never wanted to play myself literally in a game (it’s so much fun to be something other than my day-to-day), but I suspect what’s happened is that the way I’m performing myself in real life and the way I play in game have converged, at least for the time being, on a kick-ass, non-binary femme presentation.

It’s also completely possible that I’m no longer playing my characters and they’ve started playing me. 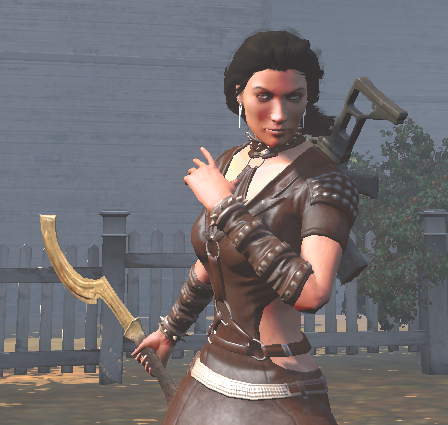 If the curl-hawk had been an available hairstyle, we’d have taken it.