“I write entirely to find out what I’m thinking, what I’m looking at, what I see and what it means.” — Joan Didion

At the Solcana event for Reclaim on Nov. 5, we were talking about how writing helps us understand ourselves. For me, writing My Year Zero helped me articulate feelings about my gender. In the novel, the main character, Lauren, is writing a science fiction story online with friends. Her character in the story turns out not to be human-like person, but rather a self-aware community of microscopic robots (nanites) that can take any form.

That’s how I feel about my gender — and I thought that was unusual, but maybe not so much.

More and more, modern science is demonstrating that if there exist ideal “male” and “female” sexes, they’re blended in nearly all people. Consider ….

The human body is made up of around 30 trillion cells and about 40 trillion bacteria living mainly in the digestive tract. For details: http://news.nationalgeographic.com/2016/01/160111-microbiome-estimate-count-ratio-human-health-science/

Of those 30 trillion cells in the human body, it’s possibly (maybe even likely) that there are variations in the DNA that we’d consider to be different sexes. Most simply, people can carry both XX and XY DNA in their cells — and many more do than initially thought.

” … new technologies in DNA sequencing and cell biology are revealing that almost everyone is, to varying degrees, a patchwork of genetically distinct cells, some with a sex that might not match that of the rest of their body.” From http://www.nature.com/news/sex-redefined-1.16943. This article also explores how sex characteristics may come from a balance in the gonads that can tip more toward male or female throughout the lifespan.

Secondly, studies are also starting to show that the bacteria in your gut can influence the levels of sex hormones in your body. See: “Gut bacteria may be a source of male steroid hormones.”

If we’re all made up of trillions of organisms and diverse cells, we’re all effectively a community that can contain different biological sexes or components leading to the experience of sex (like hormones).

Biological sex isn’t two distinct spheres — it’s a spectrum and people can move along it over the course of their lives as hormones change, cells change and genes are turned on or off.

Additionally, a 2015 study of 1400 brains found that, “The majority of the brains were a mosaic of male and female structures … Depending on whether the researchers looked at gray matter, white matter, or the diffusion tensor imaging data, between 23% and 53% of brains contained a mix of regions that fell on the male-end and female-end of the spectrum. Very few of the brains—between 0% and 8%—contained all male or all female structures. ‘There is no one type of male brain or female brain,’ Joel [the lead researcher] says.” http://www.sciencemag.org/news/2015/11/brains-men-and-women-aren-t-really-different-study-finds 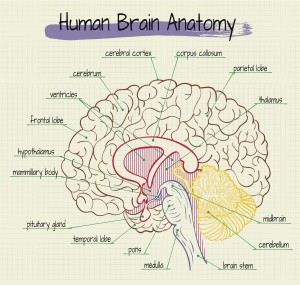 There is no part in the brain that gives rise to femaleness or maleness.

Important note: it’s not that there’s a readily identifiable “male” or “female” structure in a brain. The researchers “created a continuum of ‘femaleness’ to ‘maleness,’ for the entire brain. The male end zone contained features more typical of males, and the female end zone contained the version of the same structures more often seen in females.” This means they’re statistically clustering to create this continuum and there isn’t anything that can be independently identified as specifically sexed one way or the other in the brain. Plus they’re studying adults, so there’s no way of knowing if the “features more typical” of females and males happen because social pressure causes those brain areas to develop more strongly over time.

“… how to explain the idea that males and females seem to behave differently? That too may be a myth, Joel says. Her team analyzed two large datasets that evaluated highly gender stereotypical behaviors, such as playing video games, scrapbooking, or taking a bath. Individuals were just as variable for these measures: Only 0.1% of subjects displayed only stereotypically-male or only stereotypically-female behaviors.”

In order to be completely “biologically female/male” you have to have:

Very few people are consistently male or female at a biological level. From genes to guts to brains, we’re all a mosaic.