Emily is going to college!

Being Emily has been picked as part of the curriculum for a Spring 2014 Intro to LGBTQ Studies course taught by Dr. Lisa Hager at the University of Wisconsin – Waukesha. Other books in the curriculum include:

I can’t adequately say how excited I am that Emily gets a spot next to Audre Lorde and Kate Bornstein! Kate is a huge influence on me and any time she and the world of Emily intersect, it’s wonderful (see below).  I’m also delighted that Being Emily is part of the course called “Queering Digital Spaces,” as you know I’m a huge fan of digital spaces and what they make possible for gender expression. 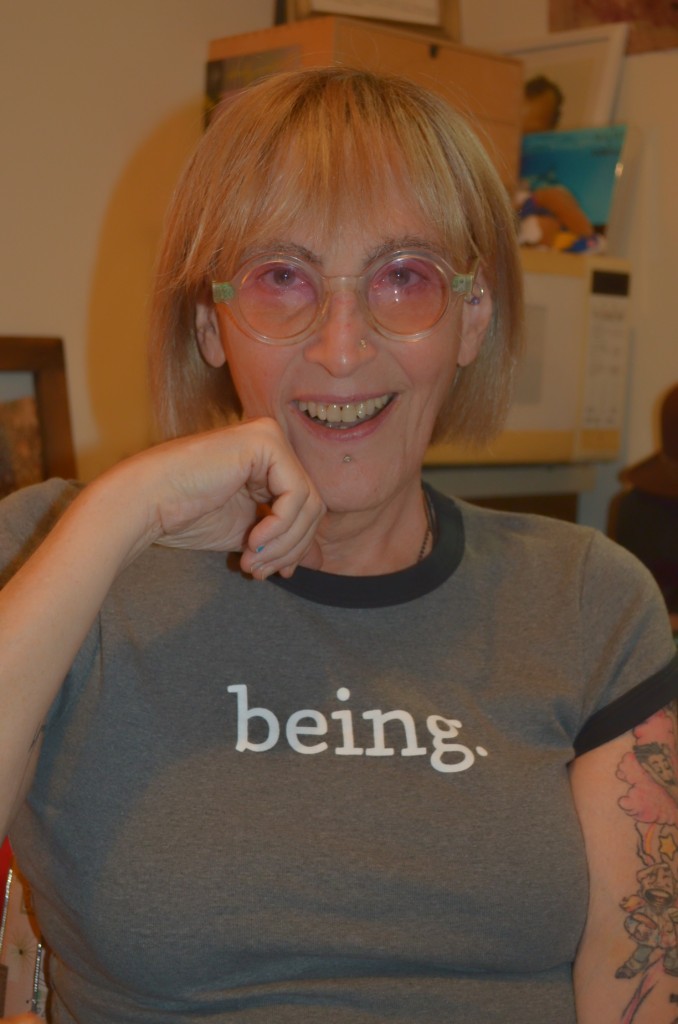 One of my favorite emails even contained this pic of Kate wearing the Being Emily t-shirt. Photo credit: Barbara Carrella.

I do have the best job in the world

Wednesday afternoon I got to visit the Gay-Straight Alliance (GSA) at Valley View Middle School in Bloomington and read a bit from Being Emily and from the sequel that will be out next year. This is my second favorite aspect of being an author: talking to people about the book, the process, the ideas in the book, and in this case also video games. (My first favorite aspect of being an author, you might be able to guess, is writing books.)

END_OF_DOCUMENT_TOKEN_TO_BE_REPLACED

I like to think that fall is book season (along with summer and winter and maybe spring). The air is crisp, it’s a good time to curl up with a novel or, if you’re feeling more social, to head out in search of your favorite novelists.

I’ll be at two book festival in the near future:

Twin Cities Book Festival, Sat. Oct. 12. I was on a panel last year and had a great time. Not sure if I’m doing anything official this year, but I’m definitely going to hang out.

Book festivals are great because they’re about books (I know, right?) and this tends to attract other book-lovers, which makes for a really great group of people to hang out with while to listen to authors say smart and/or funny things and get to shop for books. If you’re around for either book festival, stop by and say hi!

Apocalypse as a metaphor for compassion

This morning I woke up cranky and started thinking about apocalyptic stories, particularly the one in Mass Effect 3, and wondering if there’s a way in which they allow us to deal with our own sadness for the suffering we can’t fix in the world, and therefore open a path for us to become more compassionate.

The game starts with Earth under attack from an alien machine race known as the Reapers, who have come to wipe out all sentient, organic life in the galaxy. Massive robots rain down from the sky. Billions are killed.

In the midst of my bad mood, that felt comforting. I thought of Commander Shepard in the opening sequence standing in the open door of the Normandy and watching a small fraction of the evacuation, only to see the evacuation shuttles shot down a moment later. She must turn away from the destruction and go look for help for Earth.

END_OF_DOCUMENT_TOKEN_TO_BE_REPLACED

On Friday, March 8 for International Women’s Day, Catherine Lundoff and I hosted a radio program on KFAI. You can hear it here.

Since we ran through a whole lot of names and titles during the show, we thought we’d list them on our blogs for anyone who wanted to follow up on our recommendations (or add some of your own in the comments). You can see Catherine’s picks over on her blog.

These are roughly in order that we mention them, though not exactly.

END_OF_DOCUMENT_TOKEN_TO_BE_REPLACED

I’m on four panels for MarsCon March 1-3. If you’re planning on attending, I’m looking forward to seeing you there. Below are the panels I’m on and you can see the full program here.

Discuss how
strong female characters are frequently portrayed as abandoning most, if not
all, things feminine. Also, male characters who take on what are considered
traditionally female roles are being portrayed as emasculated. Can a powerful
female character be warm and nurturing and can a house husband be more than a
punch line?
With: W. Scott Patterson, mod.; Rachel Gold, Lyda Kimberly Long-Ewing, Lyda
Morehouse, Kathryn Sullivan END_OF_DOCUMENT_TOKEN_TO_BE_REPLACED

My Next Big Thing

If you’ve been following the “Next Big Thing” blog hop going
around author websites, you may have seen my post on the Being Emily site announcing
that the sequel is in progress. There’s more exciting news. I recently signed
the contract for another book to come out next year – a romantic paranormal
novel.

The details about the book are below but I also want to add
that this book and any others in its series will be out under my pen name
“Rachel Calish.” As you can see, I’m not using the pen name to cover my
identity, rather it’s to distinguish the two kinds of books that I write. Young
adult is a very different genre than romantic paranormal, so I wanted to let
readers decide for themselves if they want to read in both genres rather than
assuming that someone who loved Being Emily will automatically want to read my
paranormal novels.

What is
the working title of your next book?

What genre
does your book fall under?

What is
the synopsis or blurb of your book?

Having escaped the poverty and violence of her childhood, Ana thought
she didn’t have room for any more inner demons until she met one who knew more
about being human than she did.

Ana Koury knows there’s more
to life and she’s determined to find it when a chance meeting with the icy and
brilliant Sabel sends her running into danger. Seized by a group of men
determined to summon a powerful demon, Ana can only escape by allowing the
demon Abraxas to inhabit her body.  She chooses to work with him to go
after the men who thought they could use her.

Sabel Young is an
accomplished professor and the student of a powerful group of witches who
demand her complete submission in order to teach her how to control the magic
coursing through her body. They have assigned her to watch Ana, but without
emotional involvement. That seems like easy work until she meets Ana face to
face and is stunned by her attraction to this woman who is strong enough to
host a demon.

With her world turned upside
down, Ana finds herself drawing closer to Sabel – unaware that her involvement
puts Sabel in danger from every side.